Royalty from around the world adorn themselves in these enchanting gems. I suspect it’s because they consider sapphires the perfect blue stone to match their blue blood.

Let’s start with an iconic royal sapphire engagement ring, currently worn by Catherine, the Duchess of Cambridge because nothing says romance like wearing a dead lady’s ring. Catherine’s ring was purchased for Princess Diana in 1981 by Prince Charles who dropped a cool $37,000 (about $105,464.65 today) on it. The sapphire ring features a 12 carat oval blue Ceylon sapphire surrounded by 14 diamonds, all set in 18-carat gold. Sounds pretty, right? Well, apparently Diana’s ring was scandalous because it was made by Garrard and was featured in, gasp and clutch your pearls, their CATALOG. The royal ring could be purchased by any commoner filth off the street with $37,000 in their pocket! It seems the British royal family only wore bespoke jewelry before Diana came along.

Speaking of Princess Diana, nothing says “Screw You, Charles” after a messy divorce quite like wearing your revenge dress complete with a choker given to her from the prince’s own grandmother. The multi-strand pearl choker featured a prominent sapphire and diamond brooch turned clasp (ahem…this piece was custom jewelry nowhere to be found in a catalog, Charles). Diana’s outfit cemented her as fashion royalty…the lady could rock a sapphire, in any setting!

Now let’s dish about a royal princess that like sapphire engagement rings so much, she had two! Queen Elizabeth’s daughter Princess Anne was given a sapphire by both her husbands. First up, Captain Mark Phillips gave her a classic round cut sapphire flanked by a white diamond on either side. The center stone is a deep blue sapphire, which makes a great alternative engagement ring as the only thing harder than these rocks are the backs of the peasants whose taxes paid for it. The side stones appear to be each a half-carat diamond, which brings the ring’s value to around $28,000.

Much like a popsicle on a hot day, the marriage didn’t last though, and Princess Anne found herself in the market for a new man and a new sapphire. Luckily, she found Timothy Laurence who hooked her up with a two-carat cabochon sapphire with clusters of diamonds on either side totaling a comparatively wee 0.2 carats. I guess the smaller diamonds indicate she must really love him because they are still together today. Ahhh, love! 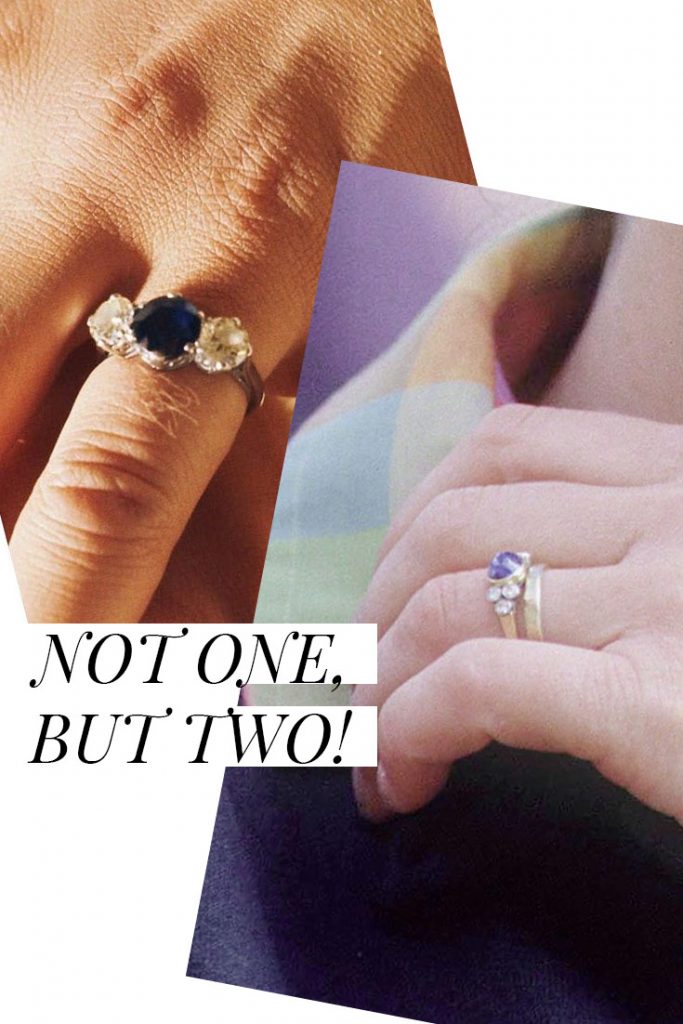 Lady Elizabeth Bowes-Lyon, better known as the Queen Mother, was initially given a sapphire ring with diamond accents upon her engagement to King George VI. Although she later replaced it with a pearl for unknown reasons…perhaps she had grown tired of being fashionable.

Princess Eugenie is among the younger generation of royals to confirm sapphires go beyond just birthstone jewelry. Her husband, Jack Brooksbank, wanted to prove to his fancy new in-laws he could pronounce padparadscha so he presented Eugenie an engagement ring featuring an oval, coral-colored padparadscha sapphire surrounded by diamonds. It is reminiscent of her mother Sarah, Duchess of York’s ruby and diamond ring, but let’s hope this marriage goes better than that one did! 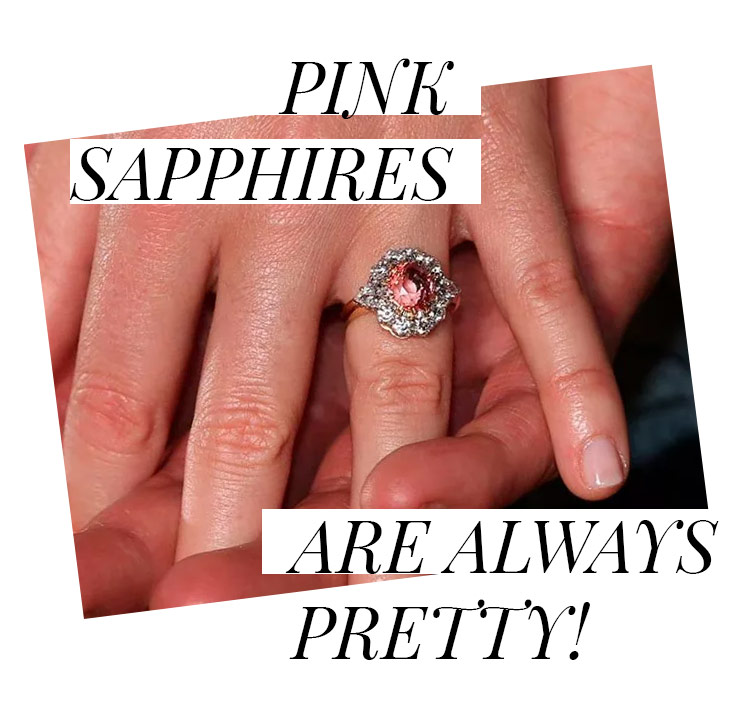 Queen Elizabeth II wasn’t left out of the royal family sapphire parade. In 1947 she received a wedding day gift from her dad, King George VI, of a set of victorian sapphire and diamond jewelry. It’s sort of a “sorry you have to marry your cousin” kind of gift. The sapphire necklace and earrings feature emerald-cut sapphires set within diamond clusters. The Queen has worn them recently while standing next to her cousin…I mean husband.

The British royalty weren’t the only ones to indulge in sapphires.  Back in 1795 Empress Josephine was given an engagement ring from Napoleon featuring a “you and me” setting. Fun fact, you and me translates to moi et toi in french, which sounds way sexier, but not so sexy when you remember Napoleon used to send a messenger ahead of himself to alert Josephine of his impending arrival and request she not bathe until he arrived…apparently he liked his lady fragrant…eww! The ring featured a diamond and sapphire of one carat apiece, modest, just like Napoleon’s height.

Dutch royal family’s Queen Maxima wore a stunning sapphire tiara to her husband’s 2013 inauguration. The tiara is part of a parure (which is rich-person speak for set) of sapphires including a tiara, necklace, bracelets, and brooches. The tiara itself features around 600 diamonds as well as Sri Lankan sapphires with a whopping 44 carat central stone. The Dutch don’t mess around!

The good news for you is that should you wish to cosplay royalty, Saint K can make you fancier than an aristocrat by designing some custom sapphire jewelry for you!

Add a sapphire to any of these!

And be sure to check out our full line of sapphire birthstone and family jewelry by shopping this link!